Bounded by oceans on three sides, Canada's coastline is as vast as it is diverse. With one-fifth of the world’s fresh water, Canada is taking a global lead in developing its blue economy in a sustainable way. Innovators in areas that span from fisheries and aquaculture to marine renewables and ocean technology are all coming together to develop solutions to confront the greatest challenges facing our oceans.

With this deep expertise, Canada’s oceans sector hubs are a natural draw for conferences across a wide range of sub-sectors. When combined with vast landscapes, diverse cities and culture, dynamic culinary and entertainment experiences, and unique opportunities to explore groundbreaking ideas, it’s easy to understand why organizations the world over are choosing Canadian locations to host their business events.

When conference-goers meet in Canada’s ocean sciences hubs, they can tap into our brain trust, connect with some of our brightest minds and preview made-in-Canada solutions. They can also explore Canadian technologies powering the future during B2B exchanges, technical tours and more. And when top performers of ocean-related global corporations are recognized and rewarded with incentive trips to unparalleled destinations and distinctive experiences in Canada, they’ll return home refreshed, inspired and ready to perform.

Canada’s global leadership in the ocean technology and sciences sector will be on full display during our signature event, Innovate Canada, taking place in St. John’s, Newfoundland and Labrador on July 25 to 28, 2022. Learn more here. 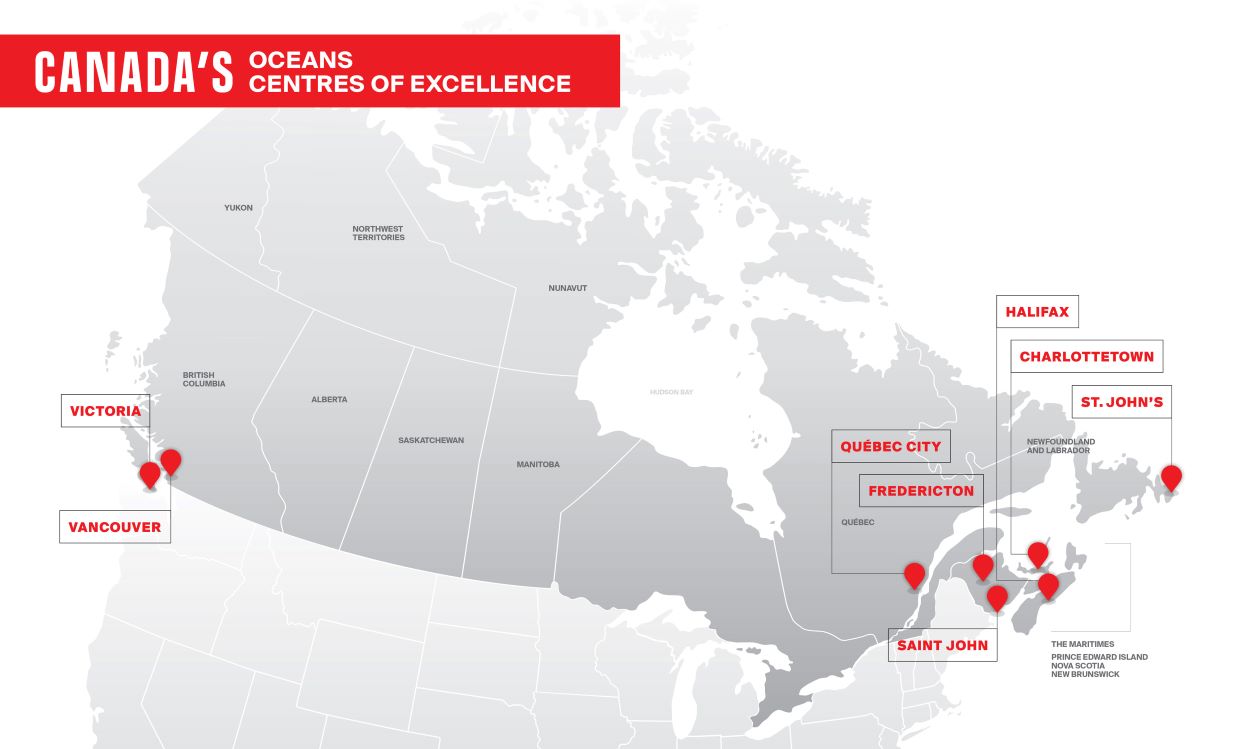 With specialized expertise in ocean imaging, sensors and data collection and a wealth of knowledge in sustainability, this picturesque seaside capital is a natural draw for international events.

A centre of excellence across the natural resource spectrum, Vancouver leads in ocean sciences. Combined with progressive climate action policies, world-class research facilities and thriving industries, and it's easy to understand how organizations gain fresh perspectives during conferences hosted here.

With its location on the banks of the St. Lawrence River, Québec City provides the perfect vantage point to welcome leading ocean-related companies and world-class research centres.

St. John’s is home to some of the world’s most exclusive facilities and technologies in ocean tech, research and innovation, which add to its reputation as a “City of Ocean Excellence.”

The ocean economy in Saint John covers a vast range of areas, including fisheries, energy, marine research, aquaculture, transportation and shipping, and tourism.

With world-class research institutes, a thriving entrepreneurial ecosystem and an idyllic oceanside location, Charlottetown is a natural choice for events dedicated to sustainability, ocean harvesting and more.

Given its strategic location on North America’s east coast, renowned universities and research institutes and talented workforce, it’s no surprise that Halifax is one of the foremost ocean centres in the world.

Canada leads the way in large ship construction. In fact, approximately $2.54B worth of new construction contracts were awarded to Seaspan’s Vancouver Shipyards and Halifax’s Irving Shipbuilding Inc. in 2020, over a project period that runs until 2029.

The new Vancouver Maritime Centre for Climate is an industry-led initiative that is committed to expediting the transition to a zero-emission shipping industry in British Columbia. By supporting the mobilization and implementation of green technologies, the initiative will help ship owners and the supporting land-based infrastructure reach zero emissions faster.

The Bedford Institute of Oceanography is Canada’s largest centre for oceans research with 600 scientists, engineers and technicians. This federal research lab is a focal point for Halifax’s ocean research and academics.

The Department of Chemistry and the Department of Biomedical Science at the University of PEI and Nautilus Biosciences Croda in Charlottetown, Prince Edward Island have isolated an antibiotic producer from marine sediment using genome sequencing.

St. John’s, Newfoundland and Labrador has a concentration of harsh marine environment institutes and facilities that are unparalleled in the world. For example, the city is home to one of the world’s longest ice tanks, the world’s largest flume tank, numerous marine simulators and a state-of-the-art wave tank.

Quebec-based Merinov is the largest integrated centre in Canada for applied research in fishing, aquaculture and the processing and development of aquatic products.

Contact Us
Return to Natural Resources page
Canada Meetings Newsletter
Sign up for our Canada Meetings newsletter to get the latest business event news. No spam, guaranteed. Or view our newsletter archive here.